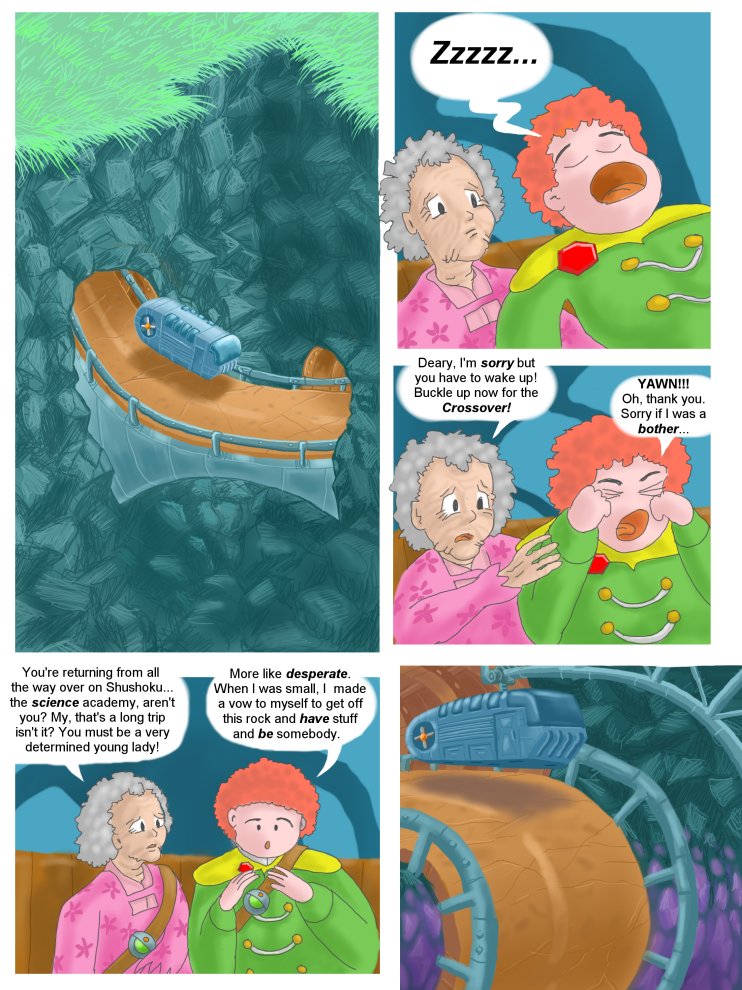 PAGE FOOTNOTES:  A Blueline Landbus often crosses from the slightly brighter Dayplains (the 'Top' of a continent) to the shaded Twilands (The 'Bottom' of a continent) during daily rounds. To do this, the Landbus hovers down a gently curving roadway, past the Underground with its various markets and cheap housing, and further down still until it reaches the P-Layer.

The P-Layer is a region of natural, shimmery purple, metallic matter that has the curious principle of producing the local equivalent of gravity for the universe of Pastel, called Proxikinesion. The Proxikinetic Layer, or P-Layer, is some fifty meters thick, and creates a gravity-like attraction which pulls matter to it. The pull is strictly 'up and down' and there is no force applied laterally, to the sides. The jist of this is that if the P-Layer is ever completely bored through, it creates a zone of Zero-P above and below the layer. To avoid that, the roadways snake through the layer, preventing any such problem.

To navigate passing through the layer, the Landbusses must face a period of Zero-P during the crossing, for once inside the P-Layer, the effects of Proxikinesion are greatly diminished, or even absent altogether. Landbusses, therefore sound a warning to passengers to buckle up for Crossover, and then the bus is latched to a mechanism that guides the bus through the Crossover, releasing the bus once it is safely past the point of Zero-P.  From that point on, the Landbus may travel normally, up to the surface of the land, which is literally upside-down relative to where it had come from. Of course, neither the Dayplains or the Twilands are truly 'Up' or 'Down', and people upon the land there think of the other side as the upside-down side, in much the same way that on earth, the continent of Australia is considered top be 'down-under' the round globe of the planet.

There are also Parks, called Low-Parks, carved out of the P-Layer, for people to enjoy a safe Zero-P environment, as well as special Zero-P factories carved out of chambers there too.

Glinu Chartreuse lives in a cheap apartment on the Twiland side of Senryoku continent, with her boyfriend, Teal. Unfortunately, the only Skybus route docks on the Dayplain side, making her commute even longer. She does this virtually every day.