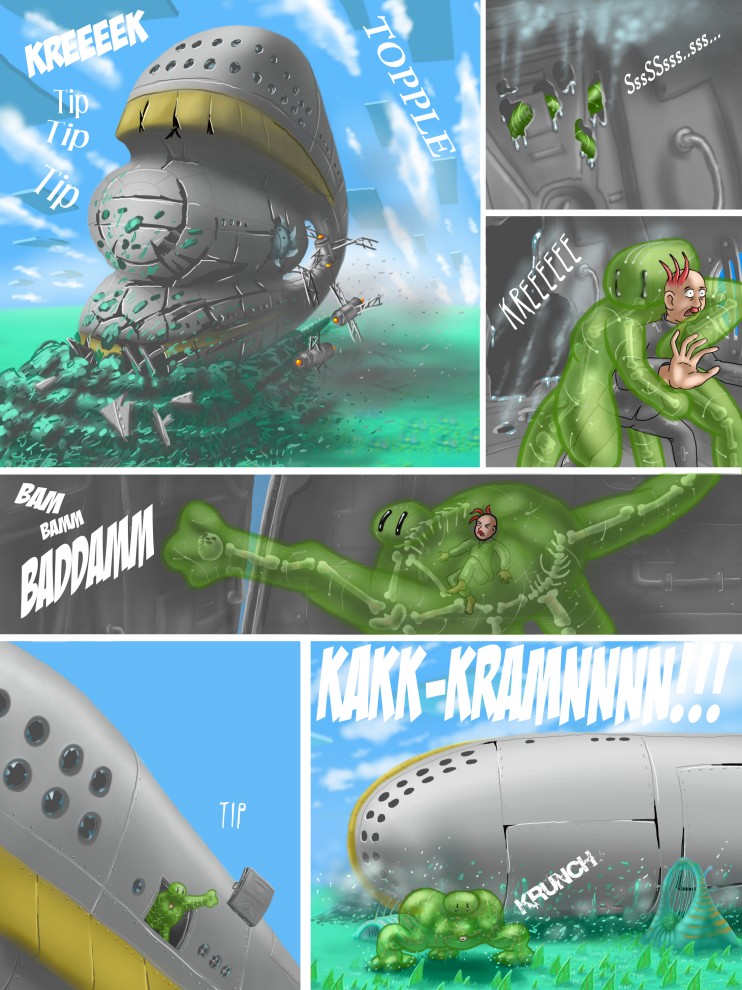 PAGE FOOTNOTES:  My biggest issues in drawing this sequence was trying to make the impact of the toppling Gunship denote force. I tried various things, such as the dirt and groundcover splashing up like water and so forth, lines of impact...it all looked too cartoony. So finally I settled on what may have been the obvious answer all along; just paint what large falling things do, which is kick up particles.

I took as my inspiration all the controlled building demolitions I have seen...things like the old Catholic Church that was demolished in my birth town of Baker, a few large buildings in Los Angeles and Los Vegas that I just happened to have been nearby to see demolished, and various televised demolitions including the New York trade center buildings. Now admittedly, all of these involved explosives, but the actual impact of large, intact objects and chunks hitting the ground are still valid, and in every case the one thing I noticed the most was that heavy impacts raise a kind of wall, or field, of particles and bits of stuff. Some of it is dust, but there is also a kind of shrapnel of larger chunks, fist sized, golf ball sized, all kinds of sizes, that all are flung up and out.

So I simply painted that...particles being kicked up and out by the impact force, and wind caused by the impact.

To denote the weight and force of Fetchenevets five story drop to the ground, I used the same concept, only on a smaller scale, avoiding my first idea of a cratering effect...way too 'Dragonball Z'. I used a bit of exaggerated squish on Fetchenevets itself as well.

Probos Bister should easily survive this fall, because he is encased in a shock-absorbing fluid mass that is working actively to minimize any harm to him. It would likely not be pleasant, and the force of landing could potentially injure him a bit, but it would not likely be fatal. If you have to fall five stories, then do it from inside a gigantic Jellese intent on saving your life, I say.

Fetchenevets, on the other hand, likely broke quite a few of those borrowed bones in the landing.

My favorite panel is panel five...the little 'TIP' of the escape hatch I thought turned out really well. It just seems cute to me.