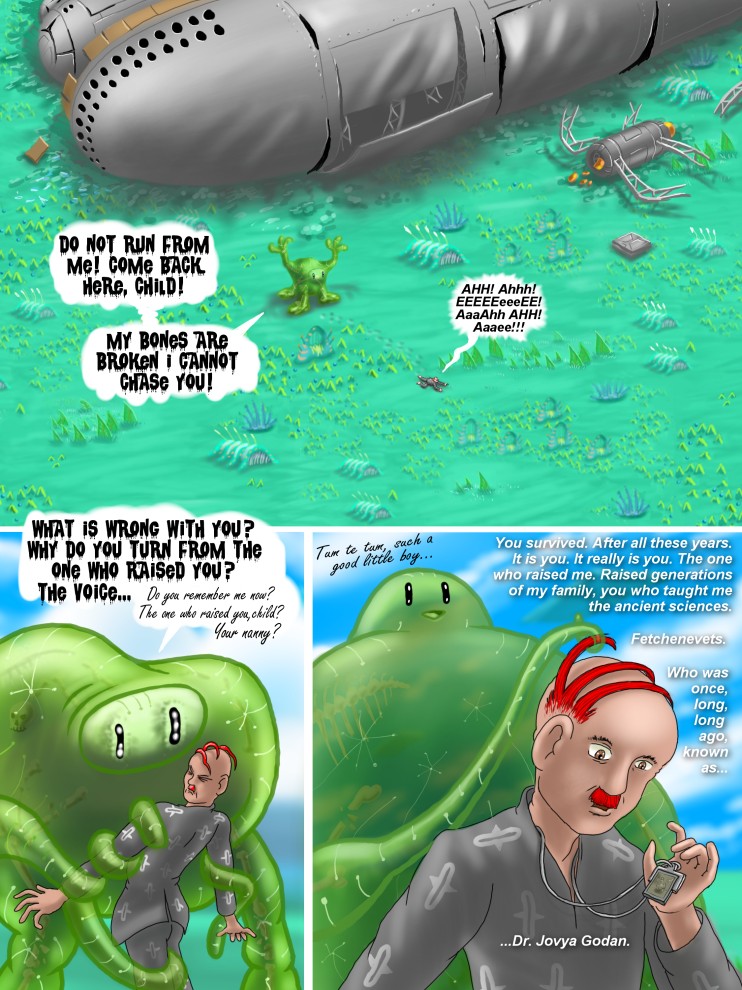 PAGE FOOTNOTES:  The Tryslmaistan Jellese, called the Drapeta Umor in the universe of Pastel, have no limit on lifespan. They are biologically immortal, as are all native life forms of Tryslmaistan. This does not mean that they do not have an average life span, based on the probability of horrific accidents, being killed, or other mishap, but if they are able to sidestep poor fortune consistantly, there is no biologically decreed decline into weakness, dissolution, and finally death.

Although the local physics makes life far more difficult for the Jellese, this basic fact remains true for them even in the universe of Pastel.

Dr. Godan, the most famous scientist of his age, and the head of the Nakimono Floating Research Island of Myrmidon in Tryslmaistan, eventually ended up just another slave of the humans, when the movement to organize an Roman-like empire began in Pastel. Eventually, as the centuries passed, and history was distorted and forgotten, rewritten to suit political need, the greatest scientist of ancient Myrmidon became simply 'Fetchenevets', a nanny passed down from generation to generation within the Bister household.

In Probos Bister, Fetchenevets found a kindred soul, and began teaching this child the ancient science of Myrmidon, the knowledge of the multiverse, and of the calculations which describe it. In return, Probos found it impossible to allow the continued enslavement of the Jellese, and assisted them to rise up against the humans, and eventually to escape en masse in captured airships.

Now, decades later, Probos Bister is a political criminal beyond any other, sentenced to permanent imprisonment, his very name an insult in human-controlled Pastel.

But Probos is also, with regard to the Introitus Project, the most valuable man alive, and it was from his old notebooks and journals and papers that Dr. Meiun Nakimono, Dr. Hannya Nakimono, Dr. Ransei Aoi, and many others, were able to work out a technological approach to opening a path between universes.

A technology gradually invented, over centuries, by a Jellese nanny in the household of the Bisters, a Jellese whose true name had, over great time, and dark ages, become deified.