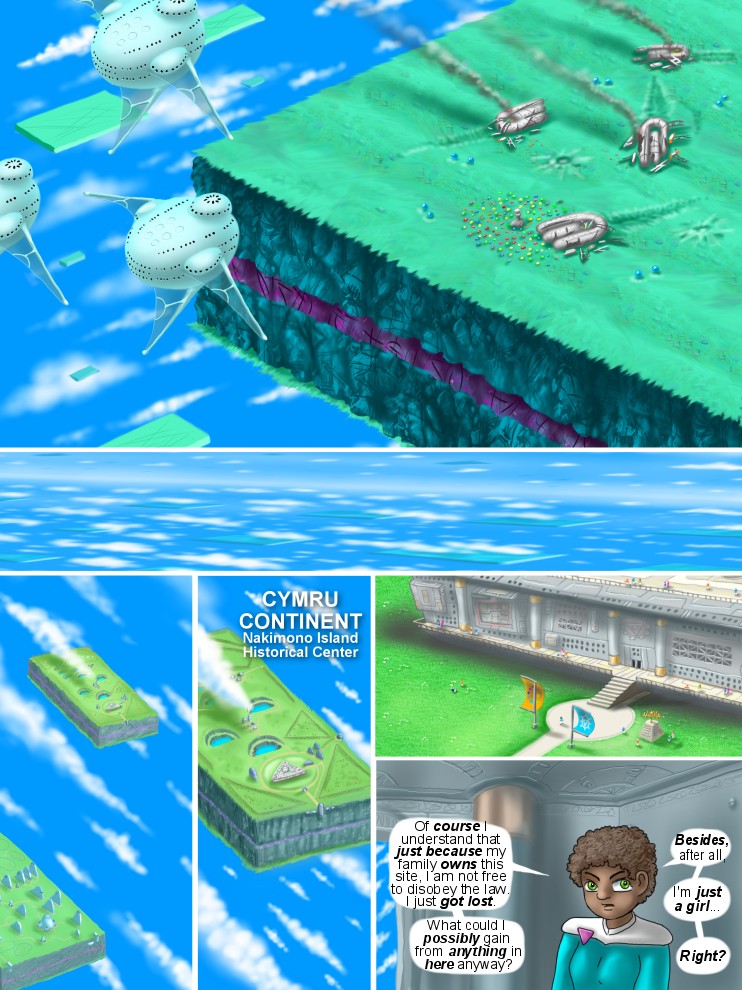 PAGE FOOTNOTES:  The Jellese ships seen above are called Umor Aeroclades.  Note the circular hatches on the back of the Aeroclades? Remember the armored, spinning yo-yo like impact-boarder that Fetchenevets used? Those, along with the twin shield-pods used by the regular Jellese troops are launched from those locations.

The Slimes swarm to excrete the skeleton of a building or ship and then flow over that frame to build up layers of mother-of-pearl-like surface. In the end a strong, uniform, organic construction is completed.

This includes the wing membranes which are an altered, flexible form of the Nacre-like building material Slimes excrete.

The Aeroclades are outfitted with Pastellian technology to make them work...Chatoyance-based technology is used to control and power the vehicles. On continents the Jellese control, they too have cities and means to produce Chatoyance. So inside those wings are lines of Chatoyant Green that control Chatoyant Orange motors to manipulate their control surfaces.

Aeroclades do not have guns like the Triumviral Gunships, the Jellese rely entirely on a strategy of impact and invasion. The Jellese seem to be melee-style infighters, rather than ranged fighters. Part of this is necessitated by their constant hunger. What they defeat, they eat. (with the digestive transformative power of their partner Slimes, of course)

The Aeroclades, like all Jellese construction, are seamless, one single complex, excreted shape, like a sea shell. They are tougher than a metal Gunship, but when they do break they tend to crack and sometimes even shatter, so there is a trade off.

The Jellese, unlike the humans, have longer and better memories, and the oldest of them still remember birds, which once existed in the zoo on Nakimono Floating Research Island. If the birds had survived the impact in Pastel, they might have done fairly well, flitting from human-converted continent to continent. This is why the Jellese make great use of wing technology, while the humans only give it lip-service, calling things 'sportwings' and such, without actually bothering to make use of wings as more than just a fancy word.

The humans have just bullied their way through the zero-p intercontinental environment and power their way through it on engines, the Jellese have taken a more naturalistic stance and actually make use of the ever-present wind, rather than just fighting it.

Humans no longer even remember what a wing really is, and because their technology works, and there is big money backing it, there is no incentive to try to work with aerodynamic shapes. There's no money in wing study, for the humans.

But for the Jellese, living on the margins, every advantage is taken, whenever possible.

As for Hannya Nakimono... we begin following her adventures now.