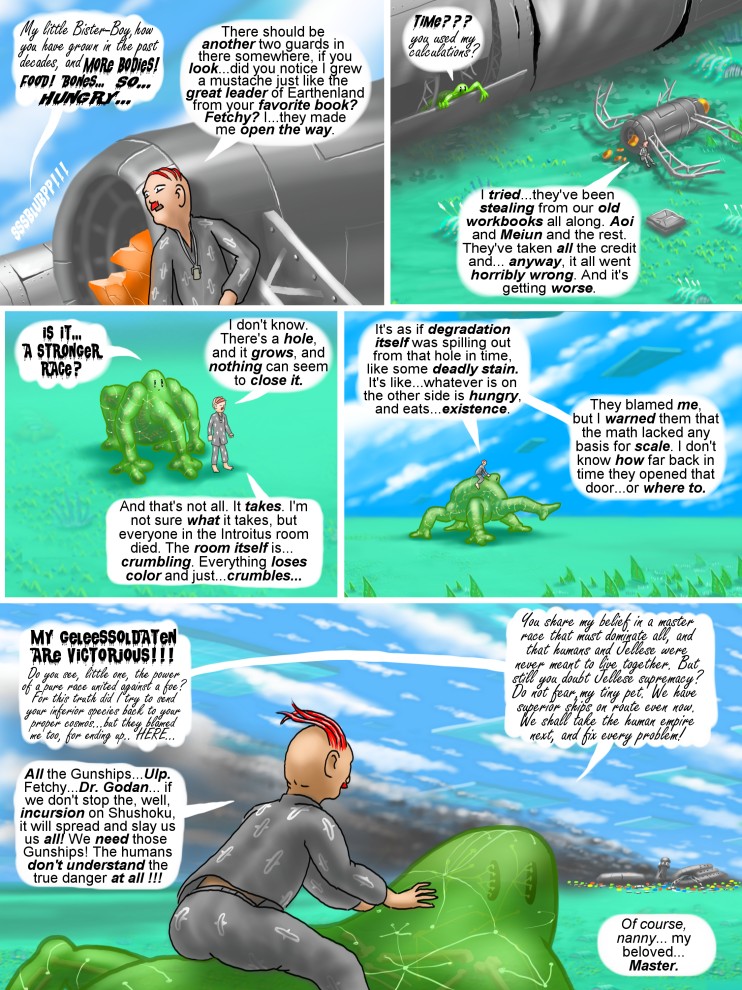 PAGE FOOTNOTES:  The network of tubules running over and through the mass of a Pastellian Jellese are their equivalent of a nervous system. Unlike life in their native universe of Tryslmaistan, Pastellian Jellese -lacking vital, ambient electanic force- must retain internal organs and structure, instead of being free to manufacture organs on a 'as needed' basis. This means that to save energy, and to avoid starving, they must struggle constantly to maintain a functioning set of internal organs, and the required biological wiring between them by sheer force of will. This has become -almost- autonomic over the centuries for the oldest of them, but they simply do not have the capacity to consciously create and maintain truly delicate and fine structures...and thus their organs, though permanent, are relatively crude and large.

Every moment of life is therefore a struggle for them, and constant pain and effort.

Needless to say, Dr. Godan's ultimate dream, the dream of every Jellese in Pastel, is to be able to find a way to return to the Tryslmaistan cosmos, with all of it's lovely ambient electanic energy, which supports and maintains their unique liquid crystalline biology.

Yes, the book that has inspired Godan to create wormholes to send the humans back to 'Earthenland' was indeed a heavily distorted version of 'Mein Kampf'. Mis-translated, altered by centuries of hand re-copying by the monks of Tinturn Abbey during the early centuries following the arrival of humans in Tryslmaistan, kept primarily because it was part of their lost world, their lost universe, the Mein Kampf that drove Godan still carried enough malice and insanity to act as motivation.

The real goal of the Trato-Yauronic device was not to help humans to learn about their origins...it was to send them back, and thus clean the universe of Tryslmaistan of the scourge of Mankind . To Godan, humanity was an invasion of barbarians that erased native culture, and conquered without mercy.

And it is arguable that this is indeed what Mankind did in Tryslmaistan.

So it is revealed that the real reason the dangerous tratonic device was used was because Godan would not listen when warned, by 'inferior' human scientists, that it just might not work as expected.

The fall of Myrmidon, what came to be known as 'Myrmil' wasn't a war between some pre-fall version of Wiccans and Alchemists as imagined, nor was it an unfortunate side effect of a grand cooperation; it was the unilateral act of a desperate racist who could not accept that unity, acceptance, tolerance and equality were valid and worthwhile things.

To be conquered is a terrible thing. To never forgive is perhaps even worse.